This unique version of the plank will develop a rock-solid core, tighten up your midsection and waist... and dare I say, flatten your belly.

Now the regular Plank is a simple exercise and a very effective one for developing core strength and stability (and I'm not talking about the plank you see on the Internet where people just lie facedown on top something... I'm referring to a REAL plank where you support yourself on your forearms, keeping your body stiff and straight).

The regular Plank is an exercise I start even complete beginners off with because of the tremendous core-focused benefits you can get from it.

This version of the plank cranks the difficulty up a LOT...it's definitely not a beginner version.

You should be able to do at least 2 to 3 minutes of a normal plank before attempting this one.

You're going to be doing the plank with one arm instead of two. The arm you're bracing on will be set perpendicular to your body, which is the reason I call this one a "hammer" plank (it mimics the hammer curl and you'll be exerting force against the ground with your fist, like a hammer).

And instead of setting the forearm in line with body and tilting so you're doing a side plank, you will instead be keeping your shoulders parallel with the ground, using your arm position to brace the core.

It's a VERY tough position and targets the obliques and deep muscles of the core strongly (the transverse abdominis, for example) by focusing on anti-rotation tension.

What that means is that you'll be exerting force to PREVENT rotation of the spine. This is a much safer way to target "rotational" muscles without actually rotating the spine.

When doing this one, you have two options...legs together or separated (I just did the legs-together version in the demo). Keeping your legs together will increase that torsion through the core. Setting the feet wide will make the exercise easier as part of the work that the abs should be doing will be done with leg stabilization.

Here's the position you will be in for the One-Arm Hammer Plank.

Notice how the arm is set and how my shoulders are kept square to the ground. This is the MOST important thing to note for the exercise... because if your body tilts up on it's side, it turns it into a Side Plank, which is a whole difference exercise. Don't make it easy on yourself.

In order to maintain that shoulders-square position, you must exert force with your fist against the ground, which carries through the arm and into the core.

Hold until your position starts to break then set your other forearm down and switch arms. 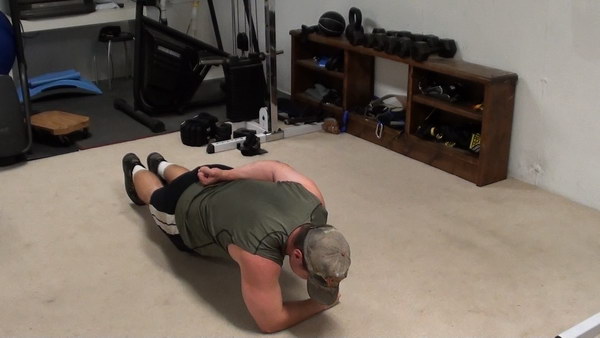 Keep repeating this side-to-side sequence until you're unable to hold yourself up (with shoulders square to the ground) on either side.

This is a VERY challenging plank movement. To give you an idea of how hard it is, I can do a normal plank for about 4 minutes...I was less than a minute on this, even switching between arms.

You will feel this one from the moment you start it and it will develop tremendous anti-rotational core strength and stability, in addition to tightening the midsection and waist.

For a plank variation that targets the lower abs, try the Lower Ab Rack Plank.