He Was a Better Bodybuilder Than Arnold...

He was a legend in the bodybuilding world and his favorite technique for building incredible mass before the advent of massive amounts of steroids was Rest-Pause Training.

If you're not familiar with Rest-Pause Training, the concept is very simple....you perform a set as you normally would, then you rest for a short of time (e.g. between 5 to 40 seconds), then you continue the set using the same weight and same exercise.

It's a phenomenal way to squeeze more results out of your training and build more muscle FAST.

With that in mind, I've got a very well-researched and informative guest article here from my friend and colleague, Dr. Carl Juneau.

Rest-Pause: Can You Really Build Muscle Faster With This Tip From the Only Bodybuilder to Ever Beat Arnold Schwarzenegger?

In 1962, Cuban weightlifter Sergio Oliva received political asylum in America. In 1969, he would become the first (and only) bodybuilder to ever beat Arnold Schwarzenegger at the Mr. Olympia.

“Then for the first time, I saw Sergio Oliva in person. I understood why they called him ‘the Myth’. It was as jarring as if I’d walked into a wall. He destroyed me. He was so huge, he was so fantastic, there was no way I could even think of beating him.” –Arnold Schwarzenegger in Arnold: The Education of a Bodybuilder (1977)

In 1984, a reporter for MuscleMag spent 3 days in Chicago with Oliva. He noted:

I would estimate that Sergio used rest-pause on 90 per cent of his exercises. On all upper body exercises Sergio used the rest-pause principle on just about every exercise and every set. –Greg Zulak for Labrada.com 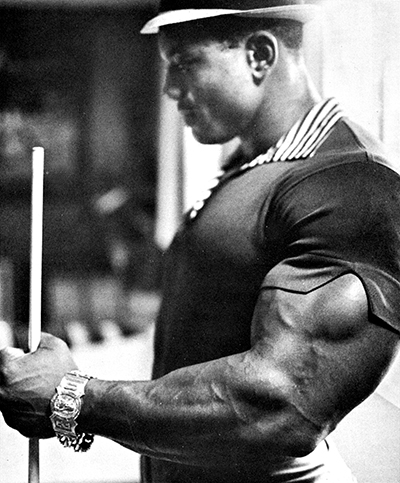 Sergio Oliva used rest-pause on 90% of his exercises

So, what are rest-pause sets? And how could you use them to build muscle faster? You’ll find out in this guide.

According to Men’s Journal, “Rest-pause is an old-school bodybuilding technique of performing a set to failure, resting a few seconds, then squeezing out more reps.”

Muscle & Strength traces rest-pause back to the 60’s and reports that Arnold Schwarzenegger and Mike Mentzer both used it.

Since then, exercise scientists have started to study rest-pause, and their results are fascinating.

After 6 weeks of training, lifters who used rest-pause gained more muscle thickness in the thigh (11%) than those who used normal sets (1%). However, their arms and chest did not grow faster. Still, these results suggest that rest-pause works well to build muscle. And here’s the kicker: this technique can cut your training time in half, because you’re not “wasting” any time resting between sets.

In fact, using rest-pause, the science suggests you could build muscle just as fast with 1 set than you would with 3 normal sets.

“An initial set with 80% of 1RM until failure with subsequent sets performed with a 20-second inter-set rest interval until completing a total of 18 repetitions.”

If you’re not familiar with exercise science lingo, this might need a little explaining:

Your 1RM (one-rep max) is the max weight you can lift once for an exercise; 80% of your 1RM is usually 8 reps. So, if you were to train using rest-pause like the lifters in that study, you would do:

And you’d be done!

On a personal note, I’ve been training with rest-pause since September 2017. I’m seeing similar gains with shorter workouts, and I don’t think I’ll ever go back.

I’m also coaching a small group of forward-thinking lifters. Many have been testing rest-pause, and they also report similar gains in about half the time. In fact, rest-pause works so well, I’ve decided to make it my default training technique. But with a twist, to make it safer and (perhaps) even more effective.

The Problem With Rest-Pause

If you were to train using rest-pause all the time as defined by most old-school bodybuilders and Prestes et al. (2017), you might end up overtrained or injured. Why?

All this training to failure is taxing, and many coaches believe that you risk overtraining and even injuring yourself if you push rest-pause for too long. But there’s a way to avoid that.

Train With Rest-Pause Not to Failure

Ta-da! While most people equate rest-pause with training to failure, you can also train efficiently not to failure with it.

You would accomplish that by doing, say, 8 reps with a weight you could lift a maximum of 10 times. By doing so, you’re keeping 2 reps “in reserve”, and you’re not training to failure on your initial set. Similarly, after each pause, you would do a few more reps, while still keeping 2 reps in reserve.

By training that way, I bet that you can still build muscle just as fast with 1 set than you would with 3 normal sets, all the while avoiding overtraining and injury. Before I show you how that looks like with an example, I’ll add one final twist I learned from experience using rest-pause. It has to do with how long you rest during each pause.

I first started to experiment with rest-pause after reading the Prestes et al. (2017)study. In that study, each pause is 20 seconds.

I quickly found that 20 seconds wasn’t enough of rest to perform more than 1 or 2 extra reps on heavy compound lifts like the squat and the deadlift. So, I started resting 40 seconds during pauses, and I advised my clients to do the same. That way, we were able to do 3-4 extra reps after every pause, and that seemed better to me.

However, after having trained with that technique for a few months now, I’ve found that I’ve adapted to it (like most things exercise). These days, I rest 25 seconds, and I’m still able to squeeze out about 3 extra reps on the squat. Also, 25 seconds is closer to the 20 seconds used by Prestes et al. (2017), and it’s more efficient. If I can get similar results in less time, I’m happy. Many of my clients think that way, too.

So, my simplest recommendation would be to rest 25 seconds. Better yet, if you’re new to rest-pause, start with 40 seconds, and lower that by 5 seconds every month until you’re at 25 seconds. Like this:

Rest-Pause With Varying Number of Reps

Prestes et al. (2017) used rest-pause with a first set of 8 reps, adding pauses until a total of 18 reps were performed. But you don’t have to do your rest-pauses that way.

In fact, the science shows that you get stronger faster is you vary your reps often. On that topic, Nuckols (2018) found that periodized training lead to larger strength gains. He concluded that “It’s probably wise to incorporate some undulations into trained lifters’ programs.” By “undulations”, he means changing reps, as in daily undulating periodization.

So, bottom line, varying your reps often is a good idea, and a simple rule of thumb I’m using with my clients is to double your daily rep target using pauses. So, for example, if you’re doing 12 reps today, you would do:

The key to building muscle and strength over time is progression. To get bigger and stronger, you gotta make progress.

You can do that efficiently by doing more and more pauses. Like this:

And so on… Catch my drift?

Rest-pause is an efficient way to add volume and progress in your training without spending hours lifting weights.

Rest-pause can be taxing, especially if you carry it out to failure. To avoid overtraining with rest-pause, I recommend you keep an eye on your performance. If you stop making progress, or if your weights or reps go down, you may be overtraining.

When that happens, an easy way to recover is to stop using rest-pause for 2 weeks. During those 2 weks, do just one normal sets for every exercise in your program, keeping 4 reps in reserve on all your sets. After 2 weeks, you should be ready to roar back into training, and to start adding pauses gradually.

Rest-pause is more efficient, because it gives you the same results in half the time. But could it also be more effective?

Prestes et al. (2017) did find that that lifters who used rest-pause did gain more muscle thickness in the thigh (11%) than those who used normal sets (1%). Another study on drop sets found that 1 drop set was just as (or more) effective than 3 normal sets (Fink et al. 2017). Why would rest-pause and drop sets be more effective?

Since publishing that article, I’ve had the opportunity to discuss this idea with some of the best minds in our field, and I realise that it’s too early to conclude with confidence that rest-pause reps are more effective at building muscle. We need more data.

Even so, if these reps are more effective, the difference is likely to be small. The main drivers of hypertrophy are still tension and volume, and to get bigger over time, you should still focus on lifting heavier and lifting more.

I wonder why not more people are using rest-pause. Especially since this technique has been around for so long. It’s just as effective at building muscle as normal sets, and it takes only about half the time. Many people say they don’t have time to train. They should use rest-pause.

Honestly, why train the old way? In publishing this guide, my hope is that rest-pause becomes more popular, so more people can look and feel their best.

Automate Your Training With Rest-Pause

Rest-pause, periodization, and other advanced strategies help you build muscle faster, but they can be confusing to implement, especially if you’re new to lifting weights. Heck, I’ve been a coach and a lifter for 17 years, I got a PhD in that stuff, and I have to sit down and think through all of this carefully before I write a good training program.

That’s why I built Dr. Muscle. Dr. Muscle is a new phone app that helps you build muscle faster with a smart program that levels up automatically. It updates every time you work out with the optimal reps and sets for you, so you always build muscle as fast as possible. It’s like a world-class personal trainer in your phone, but 10 times cheaper, always up to date, and available 24/7. And now, it automates rest-pause.

Get your smart program that levels up automatically with you so you always build muscle as fast as possible.

This is Nick again here.

I just wanted just chime in on the Dr. Muscle app that Carl is talking about at the end of his article there.

I helped him beta test this and I was really impressed with it. This is not an app that gives you exercise demos and pictures...this is all about programming.

If you've ever wondered how to best structure your workouts...daily, weekly and monthly...this takes ALL the guesswork out of the equation, using science-based formulas to determine exactly what you're going to do next based on your performance in your previous recent workouts.

Honestly, the level of science behind this app is stunning, it's that good.

There will always be a place for "art" when it comes to building strength and muscle, but sometimes the "art" comes into play by how you apply the science.

In this case, it's all about the numbers. You put in your reps, sets, and weight from the workout you just did and the app tells you exactly what you're going to do the next day. And you make progess. It's literally that simple.

If you're interested in learning more about the app and how you can use it to make non-stop progress, read through his website here.