How I Built 18 Inch Arms With Two Bodyweight Exercises

You can build BIG arms with bodyweight training. And right now, I'm going to show you the two bodyweight exercises I used to build 18 inch arms.

In fact, (and this might sound crazy at first) one of the MAJOR reasons my biceps and triceps look like this (18" in the pic below) is NOT because of free weight training. In terms of biceps, this development came from something incredibly smart (and kind of accidental) that I did in my first year of training...a form of bodyweight isometrics.

At the end of EVERY single workout, I would do a Flexed Arm Hang, holding the top position of a chin-up, squeezing the biceps hard in an isometric contraction, until I couldn't hold myself up anymore...then I'd fight the negative all the way down, then hang until my grip gave out.

I've actually also progressed by adding some additional resistance beyond bodyweight, as in the pic below. 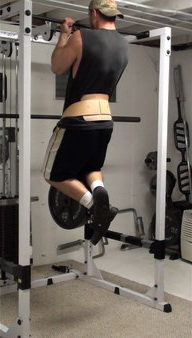 One set of one rep...that's it...done at the end of every single workout, no matter what muscle groups I hit in the workout. Simple and effective.

It built great mass and strength on my biceps and resulted in serious grip strength improvements. I like to compare it to what gymnasts do in terms of holding positions on the rings, etc. (only they do a whole lot more).

In fact, nothing made my biceps grow better than this strategic bodyweight isometric technique.

In addition, I built triceps that look like big lumps of meat by regularly doing a bodyweight exercise called "Bodyweight Tricep Extensions."

This exercise is very simply a tricep extension done with your hands set on a low bar, with your body horizontal. Then you lower your head underneath the bar, bending only at the elbows then extend back up.

Here's a view of the bottom position. I'm using the safety rail of the power rack for this one, but you can use just about any sort of low bar...Smith machine bar, bench press machine handle, a bar set on the rails in the rack, etc. 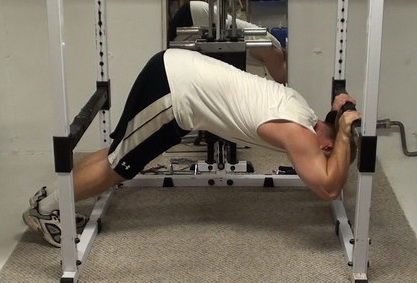 It puts an INCREDIBLE stretch on the triceps at the bottom under serious tension and resistance, which forced massive growth.

I worked very hard at this exercise and got to the point where I was doing them with my body VERTICAL, instead of horizontal... essentially doing a tricep extension in a handstand position.

There's no "secret" to this other than lots of hard work done in a smart way.

Heavy free weight training absolutely contributed greatly as well, but in analyzing it, I would say those were the two most important things I did to build seriouly BIG arms.

Now, I told you that to tell you this...

My friend and collegaue, Todd Kuslikis, is a master of bodyweight training.

And he's put together a program called "Isometrics Strength" using isometric bodyweight training principles very similar to what I just talked about above...only for YOUR WHOLE BODY.

You can see the results I got with bodyweight isometric training just in my biceps...

Now, imagine what YOU could accomplish applying these principles to every other muscle group in YOUR body.

(Just fyi, you don't have to give up training with weights...this stuff can be applied after you're done with your regular workouts, like I did, or however you'd like to work with it).

If this sounds interesting to you, I'd definitely recommend you check it out.

As I mentioned above, I'm a big fan of learning how to use your own bodyweight effectively to build mass and strength. Learn this and you'll never be without a gym.

And just so you know up front, when you do pick up Isometrics Strength program, you'll also get a 14-day trial membership to Todd's "Feel Good Life Academy" site where you'll get a fantastic amount of information on health and fitness, If, at any time, you feel it's not for you, you can easily cancel, no questions asked, and never get charged an additional dime.